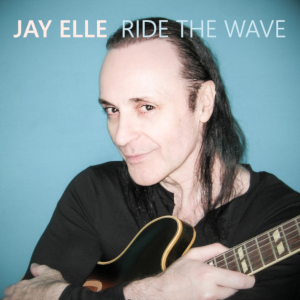 Jay Elle is an acoustic pop singer and songwriter who has an indestructible connection to his own craft that is seen in the way he enjoys his craft and the passion he shows in the performances of his diverse collection of songs that blend the fine lines of pop, blues, jazz, and rock owing to his earlier days as a band member right before he came to advance his career in the vast New York City. He has had the pleasure of working with prominent professionals in the field of music and for him, there is no turning back now- the only way is up and that is where he is headed making sure that his music creates a huge impact that will be felt across the universe as more and more listeners endear themselves to his ascending music.

“Ride the Wave” is a 12-track album that features genuine tracks that serenade the heart as much as they entertain. This is an impactful musical interlude to remind listeners all over that despite the anomalies, the sun will shine again- but before then we cannot just sink ourselves in deep hopelessness. We have to live in the moment and enjoy ourselves. “Miss Mess” is a single off of the album and it has certified pop elements with the jumpy tune which feels like it has graduated from Michael Jackson’s school of philosophical melody!

It is a lively affair right from the intro where the instruments engage in an inviting call and response which will echo in the vocals thereafter as the punchy and dutiful drums fill the airspaces with determination with the colorful bass rhythms and the abundance of euphony from the keyboard and guitar takes this track to higher grounds like an airship. Like the commandeering star he is, Elle makes his case heard in his swag and vocal stamina as he slinks through with faultless demeanor and maturity offering captivating lyricism that keeps a listener heavily invested.

This is a special track in so many ways and the inspired songwriting and dedicated performance ensure it sits right there at the threshold of genuine genius! To stop worrying and start living, follow the attached link and let your worries be washed away by the grandmaster Jay Elle!

Catch Up With Jay Elle on: